Thanksgiving: a day dedicated to spending time with friends and family and enjoying delicious turkey dinner. It’s a holiday as American as apple pie, and its impact has been felt across pop culture in film, music, and art. In particular, Thanksgiving has had a tangible influence on American art. In honor of this artistic legacy, Heart to Home Meals would like to share 6 iconic paintings about Thanksgiving. 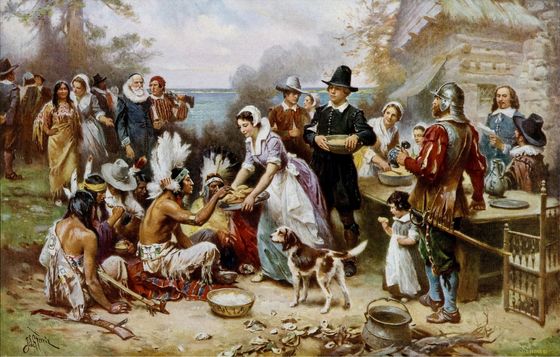 One of the most famous depictions of Thanksgiving, this piece was made by Jean Gerome Ferris between 1912 and 1914. Painted in the Romatinc style, Ferris used oil on canvas to achieve this idealized portrayal of the first Thanksgiving. Ferris created the piece as a part of his series the Pageant of a Nation, which is the largest series of American historical paintings showing important scenes from American history. 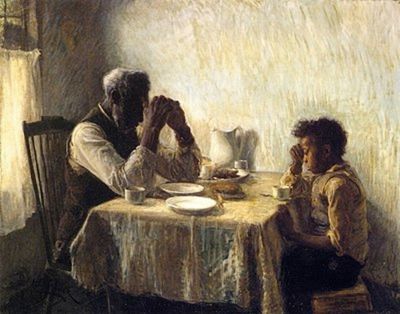 Although not specifically a Thanksgiving painting, Ossawa Tanner’s piece depicts giving thanks by those who have little. Ossawa Tanner, born in Philadelphia in 1859, became one of the first African American artists to be internationally acclaimed. He made “The Thankful Poor” in 1894, showing an older gentleman and young boy at a sparse table, giving thanks. Ossawa Tanner’s portrayal of Black Americans stands out during a time of oppression and discrimination, highlighting humanity and humility. 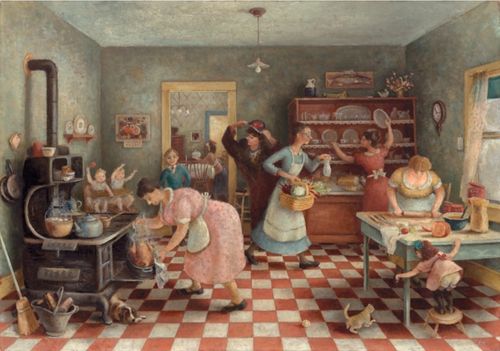 Doris Lee’s 1935 oil on canvas painting shows a bustling Thanksgiving kitchen, with women hurriedly preparing the meal. Lee includes several whimsical details, adding to the chaos of the scene—see the babies in the corner, or little girl feeding the cat? In the heart of the Depression, Lee’s work reminds viewers of the importance of family on Thanksgiving Day. While the painting was well-received and even won the prestigious Logan Purchase Prize, the award donor hated it, but this controversy added to Lee’s fame. 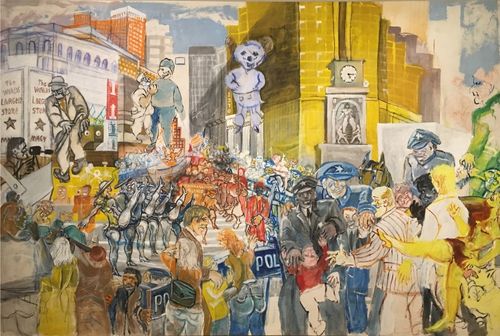 This colorful oil and pastel painting by Joseph Delaney was created between 1974 and 1984. Delaney, a Tennessee native, became enamored with the energy of New York City when he moved there as an adult. In this painting, Delaney demonstrates the chaos and vibrance of the Macy’s Thanksgiving Day Parade. In the background, a Mickey Mouse balloon can be seen floating between buildings. In the foreground, spectators watch the Rockettes perform in the parade as police attempt to keep order. Delaney’s use of color and motion allows this painting to embody the atmosphere of the famous parade. 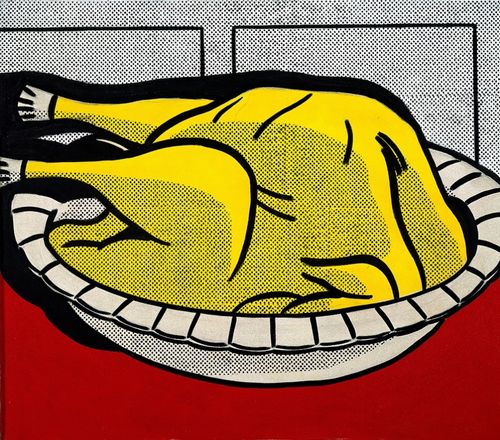 Roy Liechtenstein was a prominent figure in the 1960s pop art movement. In this 1964 print, Liechtenstein portrays a turkey inspired by newspaper advertising, which was then printed on canvas shopping bags. The piece was displayed in the 1964 exhibition American Supermarket, a collaboration between pop artists that mimicked an American supermarket, focusing on the themes of commercialization and consumerism—it was also where Andy Warhol’s infamous Campbell Soup Can was originally displayed! 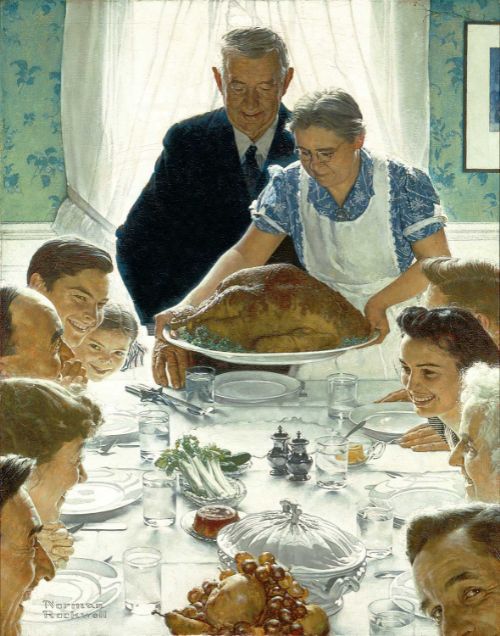 By far the most iconic painting on this list, Norman Rockwell’s 1943 oil on canvas “Freedom from Want” has come to symbolize Thanksgiving. The piece is a part of a four-painting series entitled “Four Freedoms,” inspired by Franklin D. Roosevelt’s 1941 State of the Union address. The scene depicts a family gathered around a table, right before the Thanksgiving feast, emphasizing the theme of family. This famous painting continues to impact popular culture today, with several parodies and allusions to the work in a variety of media.

Norman Rockwell's Turkey Feast Is a Thanksgiving Touchstone—Here Are 3 Things You Might Not Know About 'Freedom From Want' (artnet.com)